How to Deal with diabetic emergencies!!! 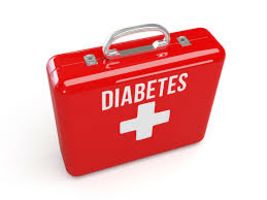 hypoglycemia unawareness, in which a person experiences no warning symptoms even when their blood sugar levels are very low.

Low blood sugar usually sets off alarms in many organ systems. The brain, which relies on glucose to function, is especially sensitive to sugar deprivation. The first signs of hypoglycemia resemble those of an anxiety attack because a decline in blood sugar stimulates the autonomic nervous system. Epinephrine (also known as adrenaline) is secreted, causing sweating, nervousness, trembling, palpitations, a fast heart rate, lightheadedness, and often hunger. The release of epinephrine is a corrective response to hypoglycemia not only because it signals you to eat, but also because it prompts your liver to make more sugar.

If hypoglycemia is not treated rapidly, it may get worse and affect brain function, leading to

* other behavior that resembles drunkenness, such as belligerence or silliness.

* A further drop in blood sugar levels or failure to treat the condition promptly may result in loss of consciousness, seizures, and even death.   *An episode of hypoglycemia while driving can cause a serious car accident, especially if you postpone treating yourself, thinking you can make it to your destination. Don’t risk it: stop and get something sweet right away if you don’t have anything handy in your car.

* If hypoglycemia occurs during sleep, the only clues may be damp pajamas (from sweating), vivid nightmares, or a nagging headache on awakening.

* Preventing hypoglycemia is preferable to treating it. If you’re taking insulin, you may experience hypoglycemia at some time, most likely because of a change in eating patterns, such as missing a meal. But if you engage in binge drinking of alcohol, have irregular eating patterns, or have liver or kidney disease, you are at particular risk.

While it’s a good idea to test your blood glucose level if you suspect you’re having a hypoglycemic reaction, often there just isn’t time. Once you start to feel strange, don’t put off treatment. Follow the 15/15 rule, as explained by the U.S. National Library of Medicine:

The following foods will provide about 15 grams of carbohydrate:

After the carbohydrate is eaten, wait about 15 minutes for the sugar to get into your blood. If you do not feel better within 15 minutes, more carbohydrate can be consumed. Your blood sugar should be checked to make sure it has come within a safe range.

Diabetic ketoacidosis (DKA) — in which blood sugar levels soar very high — is far more common among people with type 1 diabetes than those with type 2.

Symptoms of DKA include

Call your doctor immediately if your urine test shows more than a moderate level of ketones (30 to 40 mg/dL). Treatment involves insulin, fluids, and electrolytes (minerals such as sodium, potassium, and chloride) given through a vein.