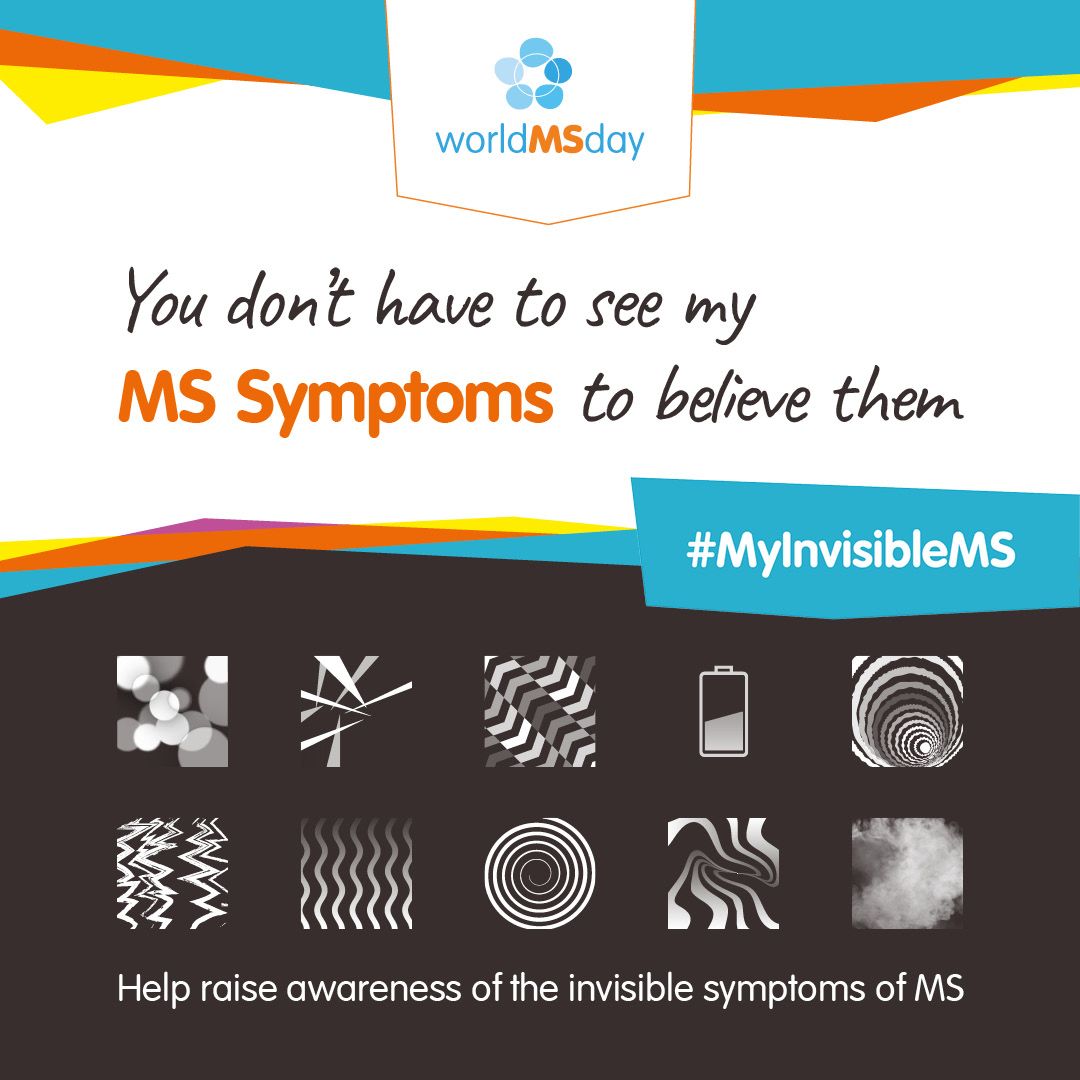 In 2009, the Multiple Sclerosis International Federation (MSIF) and its members initiated the first World Multiple Sclerosis Day on 30 May. Together they have reached hundreds of thousands of people around the world, with a campaign focusing on a different theme each year. Today is World MS Day 2019. The 2019 campaign will be called 'My Invisible MS' (#MyInvisibleMS) and the theme is Visibility.

What is Multiple sclerosis (MS)?

MS is an unpredictable and potentially disabling disease of the central nervous system, which interrupts the flow of information within the brain, and between the brain and body. The disease is thought to be triggered in a genetically susceptible individual by a combination of one or more environmental factors. In MS, the immune system attacks tissue and cells within the central nervous system (CNS) and causes damage to nerve connections resulting in neurological symptoms. Although MS is thought by some scientists to be an autoimmune disease, others disagree because the specific target of the immune attack in MS has not yet been identified. For this reason, MS is referred to as an immune-mediated disease.

How much common is MS and who can be affected?

MS is one of the most common long term diseases of the nervous system, affecting people of almost all ages in many parts of the world, although it has a special preference for young people, for women, and for those in northern latitudes. There are 2.3 million people with MS worldwide. It is likely that hundreds of thousands more remain undiagnosed and many lives are affected indirectly, through caring for someone with MS. Most people with MS are diagnosed between the ages of 25 and 31, with around twice as many women diagnosed than men. MS has a genetic susceptibility, but it is not directly inherited.

It usually causes attacks of neurological symptoms including vision loss, paralysis, numbness, and walking difficulties. These symptoms can be diverse and confusing, often coming and going without any pattern—making it difficult to diagnose, even today.

There's no set pattern to the severity of someone's MS, the course it takes and the symptoms they experience. Every person is different.

Symptoms can include blurred vision, weak limbs, tingling sensations, unsteadiness, memory problems and fatigue. For some people, MS is characterized by periods of relapse and remission (meaning it gets better for a while but then can attack from time to time), while for others it has a progressive pattern (meaning that it gets steadily worse with time). Some people may feel and seem healthy for many years following diagnosis, while others may be severely debilitated very quickly. MS makes life unpredictable for everyone.

What is my invisible MS?

In MS, there are many symptoms which are invisible to caregivers or coworkers. So, it is necessary to raise awareness and make them visible.

There are many such symptoms like transient vision problems, various types of pain, difficulty in ambulation and moving around at home and workplace and in social gathering, fatigue, dizziness and spinning sensations, muscle spasms, swallowing issue, heat sensitivity, brain fog, depression, problems related with micturition, sexual problems and many more. The characteristic of many such symptoms is that they are coming and going suddenly, suddenly they arise and remain for brief periods but they disturb lots of activity of daily living.

Let’s also know about many myths prevalent about MS.

1. Myth says “MS is same for everyone”. Truth is everyone’s MS is unique. People may experience different symptoms at different times and the impact of these symptoms can vary.

2. Myth says “people with MS can’t have children.” Truth is that having MS should not stop people from having a baby. So careful planning and discussion with family and your neurologist is especially important. One can use various modalities including “sildenafil citrate” (Viagra) for erectile and sexual dysfunction for man living with MS for better quality of life in all measures.

4. Myth says “everyone with MS will end up in a wheelchair.” Truth is that most people with MS don’t need to use a wheelchair on a regular basis, especially with early diagnosis and treatment.

5. Myth says “there is no cure for MS, so scientists clearly aren’t making much progress.” But the truth is that research has brought may life-changing treatments, that can control or slow down MS and help manage symptoms for lots of people.

6. Myth says “people with MS can’t work.” Truth is that many people – especially those with less severe MS – can stay in regular work. That’s why support from employers and colleagues is crucial.

7. Myth says “A person with MS shouldn’t exercise.” Truth is that regular, moderate exercise can help with many MS symptoms and benefit overall health and wellbeing.

So, on this world MS day 2019 let’s all join hands to demystify facts about this long-term illness mainly affecting young people and make a better world for people living with MS.